A new Chicago based health-care non-profit is making and impact for people across America with no insurance. With the current state of the economy, more and more families are living without the security of health insurance.

Changing the World One Surgery at a Time….

A new Chicago based health-care non-profit is making and impact for people across America with no insurance. ProjectHUGS (Helping Uninsured Get Surgery) opened their doors in July of 2011 partnering with Advanced Ambulatory Surgical Center in Chicago. Basic care, quality of life treatment and surgical procedures remain out of reach for thousands who are in desperate need of such aide. The HUGS leadership team have been busy already becoming members along with a $10 Million Dollar Project HUGS commitment to former President Bill Clinton’s Clinton Global Initiative.

Project HUGS had the opportunity to spend time with First Lady Michelle Obama to discuss their commitments to the new health-care reform being done in our country. Being an organization who believes in offering surgery to uninsured patients around the nation, Project HUGS shares Michelle Obama’s belief that while a new health-care system will not be perfect, it should be implemented.

“We are honored to have had the opportunity to share time with the First Lady and look forward to making an impact in the surgical field that helps those in need when they need it most. We are going to change many lives in a major way in 2012,” commented Brij Desai, Project HUGS COO. 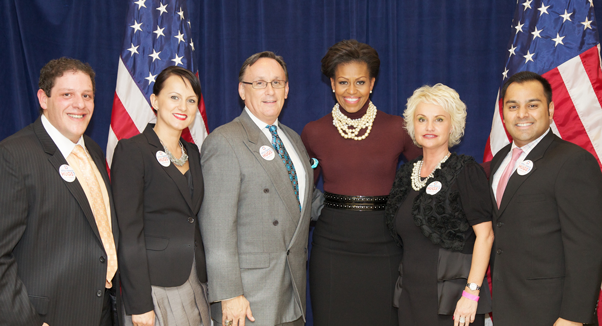 Project HUGS and Michelle Obama share a commitment for health-care and much needed benefits for the uninsured. This commitment fueled an influx of applications for surgery from those in need across America.

Project HUGS has also attracted the attention of Chicago Blackhawk’s star Duncan Keith and his wife Kelly-Rae, founders of the Keith Relief Foundation, an organization founded in 2011, which is dedicated to helping those in financial struggles with medical needs. These two organizations have recently partnered together and hope to change the lives of people both in Chicago and around our nation.

With the current state of the economy, more and more families are living without the security of health insurance as well as bankruptcy and home foreclosure. These troubles have encouraged both the Keith Relief Foundation and Project HUGS to make a valiant effort in alleviating some of the economic strain on families when it comes to medical costs.

“It is truly an honor to be one of the two non-profits the Keith Relief Foundation have chosen as benefactors. Duncan and Kelly-Rae have gone above and beyond to help Project HUGS provide to those in need both here in Chicago and across the nation,” commented Project HUGS founder Dr. Sev Hrywnak. “We are thankful to have the opportunity to help those who have been waiting on life-changing surgeries due to lack of insurance. We hope to give many people their lives back in 2012.”

Project HUGS’ Board of Directors is a venerable who’s who of leadership from across the country. From a New York State Senator James S. Alesi, to Scranton, PA’s  Moses Taylor Hospital Director of Pediatrics Dr. Stanley W. Blondek, and from Mukesh “Mike” Patel, Former White House Commissioner under President Bill Clinton, to Chicago based communication strategist and publicist Christopher Foltz.

Project HUGS also began their first annual toy drive this holiday season to give back to those in need around the Chicago area around the holidays. The organization is providing special items to children in households who cannot afford to give their kids items on their wish-lists for the holidays. The toys are still being collected at the Project HUGS’ Harlem Avenue office located in Chicago and will then be donated to various local churches and community organizations.

“The holidays are a time for families and celebration. In addition to giving back through surgery here in under-insured America, we want to make sure as many families across Chicago can celebrate the holidays with their children. Since most toy drives end around Christmas, we will continue ours through the month of January 2012 so we can add as much joy to the lives of children throughout the year,” said Joanna Brzostowska, Co-Chairman of Project HUGS.

To get involved or learn more about Project HUGS, call 855-FOR-HUGS or visit www.ProjectHUGS.org.