Chicago’s north side Uncommon Ground has been named the “Greenest Restaurant in the Country” and will open their doors for a media tour and invite only reception next week.

On December 13th Mayor Emmanuel’s office, the Green Restaurant Association, and the Green Chicago Restaurant Coalition will be celebrating with Uncommon Ground for implementing 116 environmental steps making them a 4 Star Certified Green Restaurant in 2011.
This honor is something that doesn’t come lightly. With society shifting towards both eco and socially responsible initiatives, Uncommon Ground is setting the stage for restaurants across the nation to consider green and locally sourced options for cost savings and health benefitsWith two locations in Chicago, Uncommon Ground is celebrating their 20th anniversary at the Lakeview establishment. The Devon location just celebrated its fourth anniversary and was named the number one green restaurant in America, with the Lakeview location topping the list at number two.
“I’m proud to have in our City of Chicago the Greenest Restaurant in the Country,” says Chicago Mayor Rahm Emmanuel. “Uncommon Ground is a great example of what our city can do and what our country can do, use water and energy more efficiently, grow more sustainable food, while boasting the world’s most sustainable businesses.”

The independently-owned and operated restaurant produces no waste, powers its vehicle with used fryer oil, harnesses the sun to heat their water, and feeds customers with locally sourced, sustainably produced products, as well as from their own Rooftop Farm.From Uncommon Ground’s beautifully appointed reclaimed wood amenities, to featuring the first Certified Organic Rooftop Farm in the nation, the owners Michael and Helen Cameron couldn’t be more excited about the award.
“We are proud to raise the bar and now be the Greenest Restaurants in the country,” says Helen Cameron from Uncommon Ground. “We truly care about operating a Certified Green Restaurant and we challenge restaurants around the U.S. to exceed our record of environmental accomplishments. As an industry we have the potential to make a huge difference in taking better care of our planet – and ourselves.”Each Certified Green Restaurant goes through a thorough process of certification to meet the Green Restaurant Association’s (GRA) rigorous environmental standards. The GRA vets each step and point that each restaurant implements and the GRA audits each restaurant annually so that the restaurants’ claims can be accurate.

“We are proud of Uncommon Ground’s incredible accomplishment of becoming the Greenest Restaurants in the Country,” says Michael Oshman, Green Restaurant Association Founder and CEO. “Uncommon Ground is leading the way for American restaurants and the American economy, demonstrating that green practices are both good for the planet and the bottom line. They have truly raised the bar today of what all restaurants can accomplish.”

In addition to being named the Top Green Restaurant in America, Uncommon Ground has racked up a venerable who’s who of awards in the industry including:

The invite only media tour and cocktail reception will take place at 5:30PM on December 13th at the Devon location. Invitees include Uncommon Ground loyalists, public officials, Chicago and nationally renowned green industry leaders, and will feature a rare media tour focusing on some of the amenities that brought Uncommon Ground to the world’s attention.

For media inquiries and more information about the event, contact Chris Foltz at 312-772-4865 or by email at chris@christopherfoltz.com 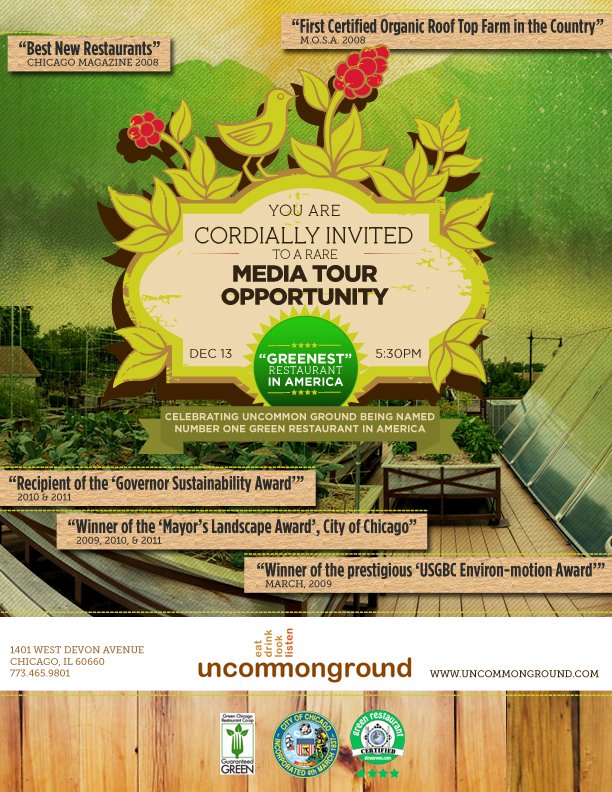